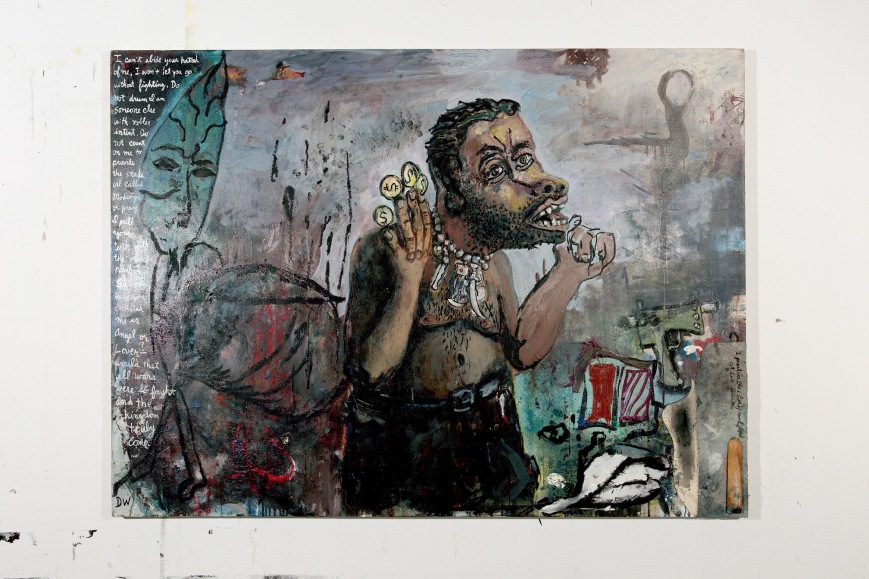 Excerpt from my exhibition catalog essay

The voice of a Williams line howls and serenades in turn.

Four coins are balanced on the tips of his bent upraised right hand. Trousers are belted, the buckle’s rendering a tender anointment on poor dark cloth. Over a shirtless hairy chest dangles the fearsome necklace with its bone-like icons and mini-saber.

Above this mercurial business looms a face—unshaven, dog-shaped jaw but human elsewhere, intent gaze fixed on a point off-stage.

And yet the captivating figure of the man does not even anchor this tableau! Rather, he serves as a launching point for the eye’s journey between numerous visual centers executed with equal conviction.

The viewing of the work has to it the intensity that one imagines accompanied the act of making the work, and that is another feat—to offer up the thing itself and the tumult of gestation.

From the grizzled visage I always turn toward the tablet-like scrawl of text to his far left: I can’t abide your hatred of me. I won’t let you go without fighting. Do not dream I am someone else with nobler intent . . .

On the edge of this plea another face floats. The mask-like entity peers over the man’s landscape like a guardian spirit. What do the slit eyes see? Where are we? It is hard to tell.

Between the two faces and the tablet exists a fourth “center” of the painting—the restive abstraction of environment, a swirl and smack of lines and stains, gray moods, shadow tones, and a floating gun’s spectral threat of violence. Were the rest of the painting scraped away this layer alone would amount to a major thing to look at, wonder over.

The whole of interacting visual centers stirs forth a dense synthesis of the material and ephemeral. There are dozens of equally dynamic works in this remarkable and long overdue show. Spending time in their company one thing swiftly becomes clear.

Depiction is never a Williams goal. Revelation is.